The kids have their own soundtrack on board Pommern. Their guide is Ruby the ship’s rat, who talks about the long voyage to Australia and home again. She will also reveal a few secrets about life aboard.

The soundtrack is written by the award-winning author Karin Erlandsson and is available in English, Swedish and Finnish. Here Karin answers five questions about Ruby and her voyage on board Pommern. 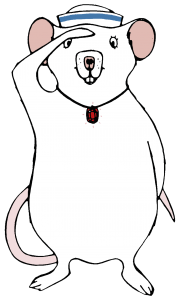 Ruby is Pommern’s ship’s rat. It means she is a rat that has found her way on board, perhaps along the mooring ropes, and has decided to make the ship her home. Like a pet that the sailors are unaware of.

Why is Ruby aboard?

Ruby knows everything – that’s something she has decided herself. Without her nothing would work on board. She bites the sailors’ toes to keep them awake, she helps the cook and makes sure the captain is happy. Ahe’s the most important creature on board, in her own humble opinion.

What is Ruby’s role aboard?

Since Ruby knows all the goings-on on board Pommern, she’s the perfect guide. She knows all the secrets, things the grown-ups are unaware of. Everyone who listens to Ruby’s tour around Pommern gets to know the most secret of all the secrets aboard, such as where the best place for a bath is.

What do the other sailors think about Ruby?

They don’t know she exists. Ruby thinks that’s for the best. For some strage reason, humans aren’t that keen on rats. She found that out once when the cook found her tasting the meat stew and chased her across the entire ship.

What do the kids explore together with Ruby?

Ruby takes the kids on a tour of Pommern’s voyage to Australia. During the voyage, there’s a lot happening: there’s a storm and there are days of shark fishing, Ruby shows where she washes and where she sleeps, she sends letters home and shows her best trick to cheer up the captain.

THE TRUST
SUPPORT US
OUR PARTNERS
VENUE
PRESS
CONTACT US